From the stars to the sewers, the vast and silvery oceans to the murky backwaters of the mind — wherever romance lies abreast strangeness, that is where QUEER ROMANCE shall go. We bring you a series of tales, sometimes sweet, sometimes slimy, limning loves-most-unlikely; drawing inspiration from the Golden Age science fiction (twists!) and romance (melodrama!) genres, QUEER ROMANCE promises to provide parcels of pious prose, pain-painstakingly pictorial for the pleasurable palpitation of passionate hearts and minds everywhere. 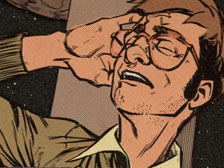 Some really nice pulp fiction here, with the art to match. If this one wins, the plan to do an anthology of ‘Queer Romance’ in the style of 2000AD’s future shocks inteagues me. This is a 4 Star comic which is amazing because its not the sort that would initially interest me – also added to my favourites!