Satan asks God for forgiveness and falls from his throne!
An event known on the Earth as the Great Siberian Explosion of 1908. Russian Czar Nicholas II and the church leaders agree that the place of the fall, called TERMINUS, should be kept secret and guarded by his men.
Exactly one hundred years later, after a small earthquake, Russian ufologist Viktor Neverov, assisted by his former lover, American archeologist Kim Wang, discovers Devilâ€™s remains. Kim and Viktor become targets for the guards of the TERMINUS and they attempt to publicize their discovery at the cost of their own lives and lives of their loved ones. The persecuted scientists change their views on life and the world around them, but is that selfsame world ready for the truth? 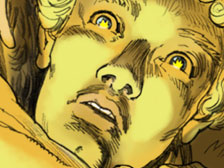 This eight pages is all build up to the final page. There is a running joke about Zuda entries, that the final page shows the monster about to strike – well this final page has a twist on the theme. This is another interesting premisis, which relies on the synopsis to explain the rest of the story.
You can see that this isn’t going to end well – but you can’t avert your eyes!
The art is clean and middle of the road – nothing bad, but nothing to rave about either.
3 Stars