I recently read IDW’s ‘Kill Shakespeare’ #2 on the iPhone. This comic has been release to great fanfare and I wanted to get into it as well. Lucky for me IDW decided to release it on their iPhone App for those who can’t get to a local comic shop. 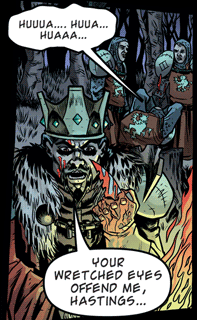 An epic adventure that will change the way you look at Shakespeare forever.

In this dark tale, the Bardâ€™s most famous heroes embark upon a journey to discover a long-lost soul. Hamlet, Juliet, Othello, Falstaff, Romeo and Puck search for a reclusive wizard who may have the ability to assist them in their battle against the evil forces led by the villains Richard III, Lady Macbeth and Iago. That reclusive wizard? William Shakespeare.

A combination of â€œFablesâ€, â€œThe League of Extraordinary Gentlemenâ€ and â€œLord of the Ringsâ€, Kill Shakespeare offers a remixed re-envisioning of the greatest characters of all-time, featuring action, romance, comedy, lust, drama and bloody violence. It is an adventure of Shakespearean proportions.

The art is great fun – this is another ‘screen swiping’ story. With intreague, murder and evil all around. Two issues in and I’m not sure who to trust!

This is a dark tale with blood and gore all the way. I missed out on ‘Fables’ but i’m told that this is close to the feel of it. I get the feeling that issues #1 & #2 have only scratched the surface.
Its early days and you can get both issues on the IDW app on the iPhone!