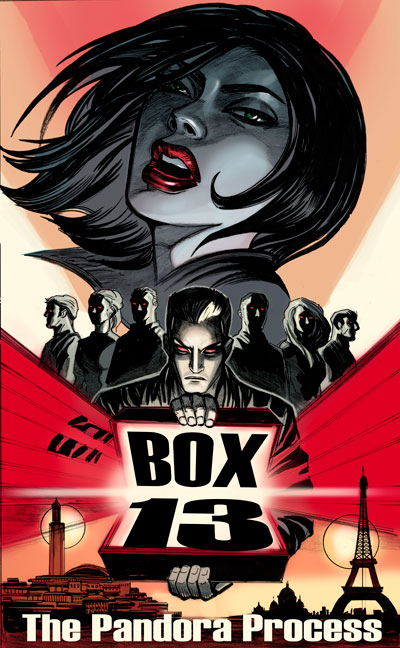 He’s the writer of hit such as High Moon and the ground breaking mobile series Box 13 and he’s written Hulk, The Winter Guard and Iron Man.

And now he has talked to 3 Million Years!

I give you – David Gallaher

Steve Ellis and I were approached by comiXology in February of 2009 to talk about developing something with them for the prototype of their mobile app. Steve and I had a good professional relationship with comiXology and we were interested in seeing how we could push ourselves and out storytelling further.Â Â We developed BOX 13 and brought it to them in June of last year â€“ the series launched a year ago this month â€¦ and the rest as they say is history.

BOX 13 is a series that is told panel by panel. I didnâ€™t find it restrictive â€“ but it did present some pacing issues. Steve and I play with a lot of different storytelling techniques â€“ and even though it presents challenges, it also present a lot of opportunities to experiment and try new things.

Making BOX 13 free was an interesting choice. In one way, it followed the pattern of what Steve Ellis and I were doing with HIGH MOON. It also followed the model of how webcomic creators have been operating for years. It just made sense to offer free serialized content â€“ that would incentivize opening the COMICS app every week. David Steinberger deserves a tremendous amount of credit for the support, delivery and implementation of BOX 13.

Would we do it again with a new title? Certainly. In fact, Steve and I have been talking about that quite a bit recently. We are looking at different models of content delivery that are sustainable. Whether that is sponsor-based, publisher-based, customer-driven, or advertising-based, remains to be seen.

BOX 13 could, in theory, go on for quite a while theoretically. Weâ€™re about halfway through the second volume.Â Â Weâ€™ve been really focused on the characters running around â€“ and weâ€™re just starting to get into their heads â€“ and thatâ€™s a fun place to be. The grand design unravels in Chapter 8 and gets even crazier from there.

I donâ€™t have those numbers â€“ specifically â€“ so I canâ€™t really speak to that. I do know that the trade has been well-received by many fans of our work on HIGH MOON â€“ and thatâ€™s pretty exciting.

I think weâ€™ll start seeing more stories that are specifically developed for the â€˜mobileâ€™ and â€˜casualâ€™ comic reading public.

A little, yes. But, for the most part, the iPad is still a luxury device for many people. As the price point drops and technology evolves,Â Â weâ€™ll be looking at more ways to develop our stories â€“ not just for the iPad â€“ for other devices as well.

Iâ€™d like to see more publishers and creators developing original content specifically for mobile devices. I think now is the perfect opportunity to create more stories to bring in the casual comic reader with self-contained, dynamic, and exciting original content.

Chapter 8 reveals â€“ at least sort of â€“ the secret agenda of Klaus and the Nursery. The series only gets crazier from there.

I think DC learned a lot of important lessons with Zuda â€“ and Iâ€™m really rather excited to see what happens next.