I’m not really into the big crossovers at the moment – after Blackest Night, Final Crisis, Secret Invasion & Dark Reign, I’m a little bit frazzled to be giving Fear Itself and Flashpoint my all. That’s not to say I’m not keeping in touch with them!

Fear Itself is the Marvel title which is tying into the likes of Thunderbolts, Deadpool and moreÂ across the Marvel Universe.

To complement these titles and the main series, Marvel have released free short comics on their app. These free titles cover a little on the mindset of ‘The Worthy’ -Â hammerÂ wieldersÂ who are theÂ antagonistsÂ in this series. 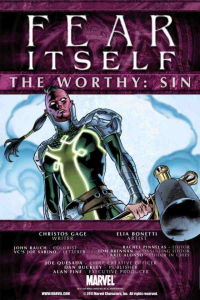 The current releases are:

Meaning all that is left is:

As free comics they are nothing to complain about, but I do wish Marvel would do more titles like this – free character profiles, giving an update on a character who either is going to be featured in a series or maybe who Marvel want some feedback on?