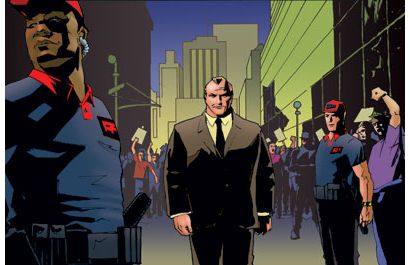 Migrating from print to digital is Clint magazine’s other controversial star – Rex Royd.

Written by controversial comedian Frankie Boyle, Rex Royd is something which needs to be seen to be believed!

Personally I’m a little shocked it got past the Apple censors!

Exploding out of the pages of CLiNT, the trailblazing comics magazine from KICK-ASS creator Mark Millar and Titan magazines, Frankie Boyle’s twisted comic strip is now available for iPhone and iPad!

REX ROYD, by outspoken Scottish comedian and writer Frankie Boyle, introduces “The Renaissance Man of Madness” in a spectacular serialised comic. Drenched in the blackest of humour, Boyle weaves the barrier-shattering adventures of Rex Royd, a Lex Luthor-style super-scientist and businessman. Along with his close-knit support staff including Eve, the first woman, and his invincible head of security, Alan Black, Rex is out to change the world… whether we want him to or not!

Rex Royd comics by Frankie Boyle are now available to read on the iPhone and iPad. Search for the Titan Comics app in the app store or visit:
http://itunes.apple.com/app/titan-comics/id388961811

A new season of Rex Royd comics starts in CLiNT #12 — on sale 24 November — making this the perfect time to catch up with Boyle’s scathing supervillain satire!