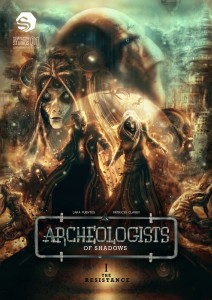 Every so often I get to see something special.

A while ago I was asked if I was interested in looking at a new title from Septagon Studios. Having already read and reviewed the excellent Gator Butch and MasksÂ I jumped at the chance.

What IÂ receivedÂ was Archaeologists of Shadows 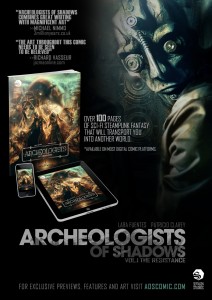 Archeologists Of Shadows is a unique and innovative graphic novel project that has been in development for about five years now with a team thatâ€™s spread across three countries. With a writer and artist based out of Spain, an editor from Austin, Texas, and a publisher based out of Toronto, Canada, this is by far the most original, artistic and epic project weâ€™ve ever undertaken.

Writer Lara Fuentes and artist Patricio Clarey have collaborated with Septagon Studios to publish the graphic novel Archeologists Of Shadows, with editing and adaptation by Preston Park Cooper. 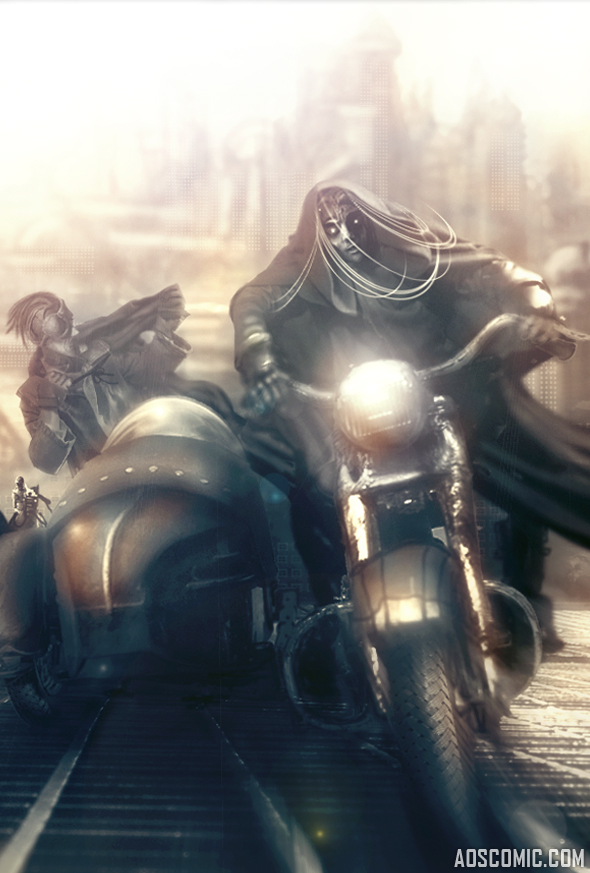 With over 100 pages of story, art and writings, this took me a while to get through, but boy! was it worth it!

Archeologists Of Shadows is set in a world where every living thing is becoming mechanical. Some think that the phenomenon is the will of the gods, and so the Authorities punish those who resist the transformation, although all wonder about the real reason for the changes.

An amazing front cover which stands out in an excellent way – I am a big proponent of covers being something to draw the eye, and this does just that!

Colour, light and size are what stands out to me in this, the colour pallet is incredible, giving the shadows and the lights the emphasis that it deserves, I struggle to think of any comic I have read thatÂ reflectsÂ this well. Along with the panels and boarders, the pages stand out in a way which doesn’t seem possible.

Parts feel like some of the overreaching shots in the Star Wars film – especially theÂ prequelsÂ – which is weird, but some of the big shots of crowds and cities are the best parts!

The style of theÂ dialogueÂ is perfect – with the writing reflecting their worries andÂ apprehensivenessÂ of their new directs and the art of the lettering showing up, without being obstructive to theÂ beautifulÂ art!

The bike chase in chapter 2 conveyed the speed and rush of the scene. There was panic and movement, and it all slowed down to a crawl in a moment! (and a nice turn I didn’t expect!)

In conclusion: This is a comic I enjoyed – I really didn’t think it would be my thing, but I found it captivating. I want the art on my wall, everywhere. The story is well structured and works like a new mythology! Everything fits in this ‘ArchaeologistsÂ of Shadows’ combines great writing withÂ magnificentÂ art and lettering which brings it all together. This is a title which makes me want to post everywhere with a simple message – Read This Comic!

You can get this comic right now from Graphicly, My Digital Comics and soon on Comics+ and The Kindle

Read the free preview on Graphicly below!